Posted on July 19, 2014 by ordinarymiracletoday

As promised, here’s a look at some of my favorite chickens from the fair.  There was a good turn out this year and it’s hard to narrow down my favorites. 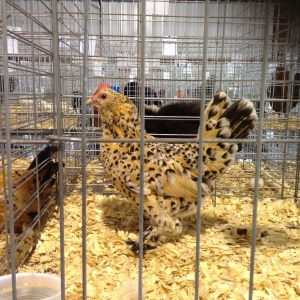 This was the first beauty I saw.  I didn’t keep track of the breeds, so I’m not sure what she is, but I love her plumage.  She was obliging enough to let me collect a few feathers from her cage – one of the ones I collected is at the bottom of the pic near the water bowl.  I’ll do something special with them – they are a soft brown color with tiny white speckles.

Which end is the head?  And which is the tail?  It’s rather a toss-up with this breed.

Who can resist baby chicks?  So soft and fluffy looking, aren’t they?

The world’s fluffiest chicken.  It looked like he was covered in fur instead of feathers.

And this was the most hilarious part of the fair.  Please note the egg that I have circled.

Here is the signage for this chicken.  It had been sexed as a cockerel.  Presumably after the appearance of the egg, the discrepancy was noted and it was corrected to pullet.  You have to keep an eye on those chickens every second – you never know what kind of trick they’ll pull on you.  Hope you enjoyed the pictures of the chickens.

Blessings to you,
Sarah