Posted on May 8, 2016 by ordinarymiracletoday

Early last week I was paging through a recent issue of Midwest Living magazine.  In the “current events” at the back, an art exhibit called “Daubigny, Monet, and Van Gogh” caught my eye.  It was on display at the Taft Museum of Art in Cincinnati through the end of May.  Last Saturday morning found my mom and I on the road headed east to our favorite weekend getaway.  The Taft museum is the historic home of Anna Sinton and her husband Charles Taft.  Their extensive art collection is on permanent display and several galleries house traveling exhibits.  This was the only US stop for Daubigny – the exhibit featured over 40 of his works, along with a handful each of Monet and Van Gogh.  An international collaboration, this collection emphasized the role of Daubigny as a founder of the Impressionist movement.   Daubigny was born in Paris in 1817 and was trained in classical painting by his father.  His early works are masterpieces of Realist landscapes.

“The Pond at Gylieu” is a prime example.  We were told by the docent that ecologists can identify over 40 species of plants and animals in this painting because of the incredible accuracy with which he rendered the scene.  In a contemporary reaction, one viewer commented that he always felt he would get a chill from viewing Daubigny’s paintings because they felt so humid.  Daubigny loved capturing the weather.  Early on he developed a fascination with the sky and painted it lovingly throughout his life.  He differentiated himself from other landscape artists by bringing the point of view down to water level.  In fact, he even bought a small boat and traveled the Seine and other rivers extensively, painting the views as he saw them in his tiny houseboat.

“La Printemps” was one of my favorites.  It’s hard to capture the depth and grandiose size in pictures here.  The paintings were huge and so full of detail and light that they looked three dimensional.  We learned that Daubigny was one of the first to paint trees in flower.  It proved a popular idea and painters by the score followed suit throughout the Impressionist movement.  Daubigny himself continued to paint orchards in bloom nearly every spring of his life.  I love this one for many reasons, but mainly because the trees to the right are filled with little perching birds and the sky is dotted with birds in flight.  It was a charming and beautiful touch.  Daubigny championed large horizontal landscapes, often customizing his canvases by putting two standard frames together.  Although rare at the start of his career, it was emulated by other painters and the perspective gained in popularity.

The only vertical painting of Daubigny’s on display was this one: “Landscape with a Sunlit Stream”.    This was also a favorite of mine because the whole painting is just saturated in green.  It really felt like a sort of portal that if you stared long enough, you’d find yourself transported to the scene.  Although painted when Daubigny was ostensibly in his “Impressionist” period, this piece still retains strong evidences of his Realist background.  Just look at how masterfully he directs the light down to the center of the scene, reflecting into the river. 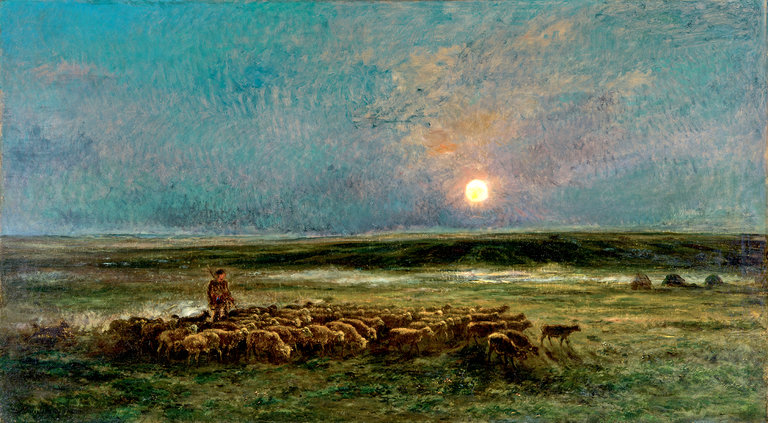 We saw several fine examples of Daubigny’s night scenes.  I admired him for his obvious enchantment with the moon and it was interesting to see how his rendering of night scenes changed as he was influenced by the Impressionists.  This is “Moonrise at Auvers” or “Return of the Flock”.  His novel use of new tinned pigments brought vibrancy to his sky-scapes and introduced new colors to the public.  He skillfully commands complementary colors to create a moody night scene, with the watered moonlight illuminating the sheep and the shepherd on their way home.  A contemporary art critic had this to say about the painting:   “Night has just fallen and transparent shadows veil the fields, while the full moon rises in a clear sky.  You can feel the silent quivering of evening and the last sounds of the fields as they fall asleep.  It gives the impression of a limpid grandeur, of tranquility rich with life…”    Moonrise was Charles Daubigny’s last painting.

It was a once-in-a-lifetime experience to view these masterpieces and to catch a glimpse through the curtain of history of an artist whose life was rich with tranquility and whose soul was captivated with beauty.

This entry was posted in Uncategorized and tagged art, Charles Daubigny, Cincinnati, Impressionism, Taft Museum of Art. Bookmark the permalink.