Posted on April 23, 2017 by ordinarymiracletoday

We are blessed beyond measure with a wonderful art museum nearby and I’ve spent many, many happy weekends enjoying the special exhibits, the permanent collections, and the gardens.  Much to my delight, a gallery featuring the work of Audubon recently opened and will keep us company through the end of July.  My mom and I were able to visit the exhibit for the first time today.  And how appropriate it was that today is also Earth Day.  I could think of no better way to celebrate than by delighting in the exquisite art of Audubon,  one of our nation’s greatest natural historians.  The exhibit focused on his Birds of America portfolio and was organized according to the expeditions he took to paint the birds of each region of the eastern US.  Audubon spent over a decade painting the 435 prints that form his magnum opus.

We spent the day learning the processes involved in painting the watercolors, creating the prints, and publishing.  We marveled at the expert artistic technique mingled with an acute observation and understanding of the natural world that birthed these masterpieces.  And above all, we gained a deeper appreciation of the diversity and beauty God displayed when He gifted the world with birds.  We left the exhibit sobered by the knowledge that many of these beautiful birds have suffered overhunting, habitat loss, and extirpation at the hands of men.  Even in his own lifetime Audubon witnessed wholesale slaughter and decimation of once plentiful birds.  He worked to establish protection of birds in their nesting grounds and sought to limit habitat destruction.  Six of the birds that Audubon painted are now extinct and many others are now endangered.

North America’s only indigenous parakeet – the Carolina Parakeet was found throughout eastern US.  Audubon pictured them here consuming a cockle-bur plant.  He orients the birds in such a way as to show off their brilliant plumage.  Their brightly colored feathers made them a desired element for ladies’ hats and their propensity to eat anything they could light on made them a mortal enemy of local farmers. 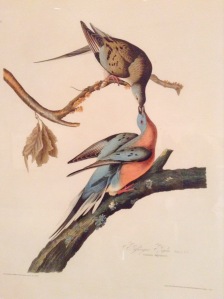 The Passenger Pigeon was one of the most abundant birds in North America.  In Audubon’s lifetime, their numbers were estimated at over 3 billion.  Audubon writes of traveling in the company of great crowds of pigeons:  for three days so many birds flew with them that they clouded the sun.  At one point he counted flocks as they spun in the sky and numbered 163 within just 21 minutes.  He records the large numbers of settlers that lined the banks of the river and felled the birds by the hundreds and thousands with guns.   60 years after Audubon’s death, the pigeon’s would be extinct, along with the Carolina parakeet.  The last free-ranging individuals were seen in the early 1900s and the final representatives of their species died in captivity around 1914 (both were housed at the Cincinnati Zoo). 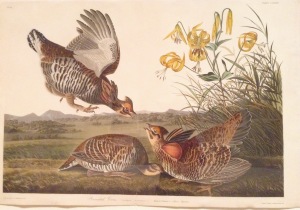 Others, like the Pinnated Grous, were already noticeably declining in Audubon’s time.  He mentions of this bird that they had already abandoned his home state of Kentucky and were removing ever further west.  In their case they were vanquished not by guns, but by habitat alteration and destruction.  Today the species is restricted to isolated remnants of the tall-grass prairies in the Great Plains and is listed as vulnerable and threatened.

Seeing these birds captured in watercolor from nearly 200 years ago served as a grave reminder that we are charged with protecting and caring for creation.  Each of these creatures is a unique and priceless gift given life by God.  It is our sacred duty to love and care for them as He does.

“If I were cruel I would tell you of a million wonders that you will never get to see and never get to touch.  Fascinating, beautiful creatures from all over the world that will never delight, amuse, or astonish you.   Extraordinary lives of dazzling complexity that will never take your breath away…

because we have already taken theirs.” – Priceless

Let us shelter and cherish what remains.