Posted on April 1, 2018 by ordinarymiracletoday

On the eve of Easter my thoughts are drawn to what this day means, to what God has done for us.  The reality of an empty tomb defies all logic.  Millennia and millennia of human experience showed us that nothing was as powerful as the grave, nothing as final, nothing as greedy.  The legacy of the first man, Adam, left a long line of sorrow, death, and despair at the cost of sin.  And then suddenly one quiet morning, everything changed.  The Son of God, and the Second Adam, exited the tomb where He was hastily laid just a few days before.  In one victorious instant, the greatest enemy was defeated and the grave made powerless.  Christ had overcome death and reversed the fate of the world.  His resurrection is called the “first fruits” and it is His promise that as He rose, He will raise all those who look to Him.  Death lost its power that day because God gave us life.  Though we still face a physical death, we have confidence that through that death we enter a life more real, more glorious than anything we could comprehend.  Death is not a destination, it is now only a door that opens into the splendor of God’s presence.

Jesus is called “the Second Adam” in the book of Romans and it’s one of my favorite names for God.  The discourse in Romans 5 is among my most loved Scriptures as it contrasts the consequences of Adam’s disobedience resulting in death to Christ’s obedience that brings us life.  And that’s as far as I’d taken the analogy until this week.  But in His role as a second Adam, Christ is not only reversing the curse of sin, He has completed a second creation. The whole of the Old Testament is preparing the world for Christ’s work to establish a new covenant of grace, a new creation that will be eternally redeemed.  But the New Testament echoes the creation account in ways I’d never thought about until recently.

Genesis begins with the statement:  In the beginning God created the heavens and the earth.   The gospel of John begins his account of Christ’s ministry in the same way:  “In the beginning was the Word… .and the Word became flesh and dwelt among us.”  At the beginning of time, God creates the universe and man.  In the fullness of time, at the dawn of a new creation, God clothes Himself in flesh and enters His creation to redeem it.  The first creation centers on a garden, the garden of Eden, where paradise is tragically lost.  Christ is buried and resurrected in a garden as well, but in this garden paradise is regained.

The first words of God that are recorded in the Bible are when Adam and Eve have sinned and God comes to meet with them.  “Where are you?” “What have you done?” And the question haunts us through the centuries of devastation and heartache.  Our Creator God looking for us, piercing us with questions that force us to meet the reality we find ourselves in.  We are lost, we are hurt, and we want to go home.  It’s a question we can hardly answer – we ourselves don’t know where we are or how to get back to what our hearts long for.  But God knows where to find us, and He comes after us with a burning passion that takes Him to the cross to pay for all the debt of sin that we never could.  His pursuit ends in a tomb.  And then that Sunday morning, we hear a risen Christ’s first words in the garden spoken to Mary…. “Who do you seek?”  “Why are you crying?”   On the eve of a new creation, God poses yet another question to humanity.  He has found us and now we have found Him.  As we see the risen glorified Savior, we know He is what we’ve been searching for.  He is our Home.  Mary answers Christ with but a single word – His name.  It is a story of a creation lost and regained in that moment.  A reunion of God with His creation.

The book of Revelation looks ahead to the day when Christ will establish His reign over a renewed and glorified creation.  What he started in the Garden of the Resurrection was a new creation of hearts transformed.  What we look forward to is the day when all the effects of sin will be wiped away from the earth and from our bodies and we will dwell with Him in perfect relationship again.   The words spoken from the throne of God in Revelation 5 echo back to the question at the tomb.  “Weep no more, for the Lion of the tribe of Judah has triumphed.”   Mary’s tears evaporated in the light of knowing the One she loved was alive and with her.   As a new creation dawns, our tears will disappear like dew in the light of the sunrise.  Our Savior has triumphed over sin and death, and He comes to be with us forever.  Rejoice in the hope and glory of His Easter promise. 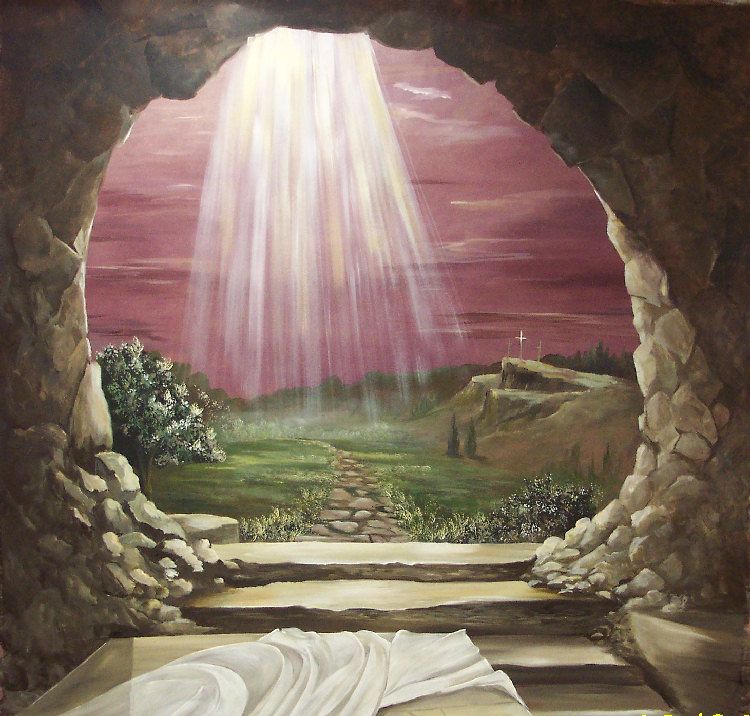